Research and development in industrial biotechnology contributes to the growing European bioeconomy which, according to the European Commission, is worth around 614 billion euros and provides approximately 17.5 million jobs.

The leading industrial biotechnology event that engages key stakeholders in this sector is the European Forum for Industrial Biotechnology and the Bioeconomy (EFIB) which was held in Vienna from 6 to 7 October, 2021. The event was hosted at the Vienna International Centre situated at the United Nations headquarters where over 300 participants attended.

The face-to-face EFIB Forum came as a relief to many deprived of networking opportunities since the outbreak of the Corona virus pandemic in January 2020. Scientific and industrial partners from the Horizon 2020/BBI JU projects SUSFERT and SUSBIND were on the speaker’s list over the two day event, and were present at Stand 5 for networking opportunities, hosted by communication partner RTDS.

BBI JU Executive Director, Philippe Mengal, visited the RTDS stand where he met RTDS CEO, Stephen Webb, and key scientists and industrial partners who are making considerable contributions to the circular bioeconomy. A snippet video of the event can be seen HERE. 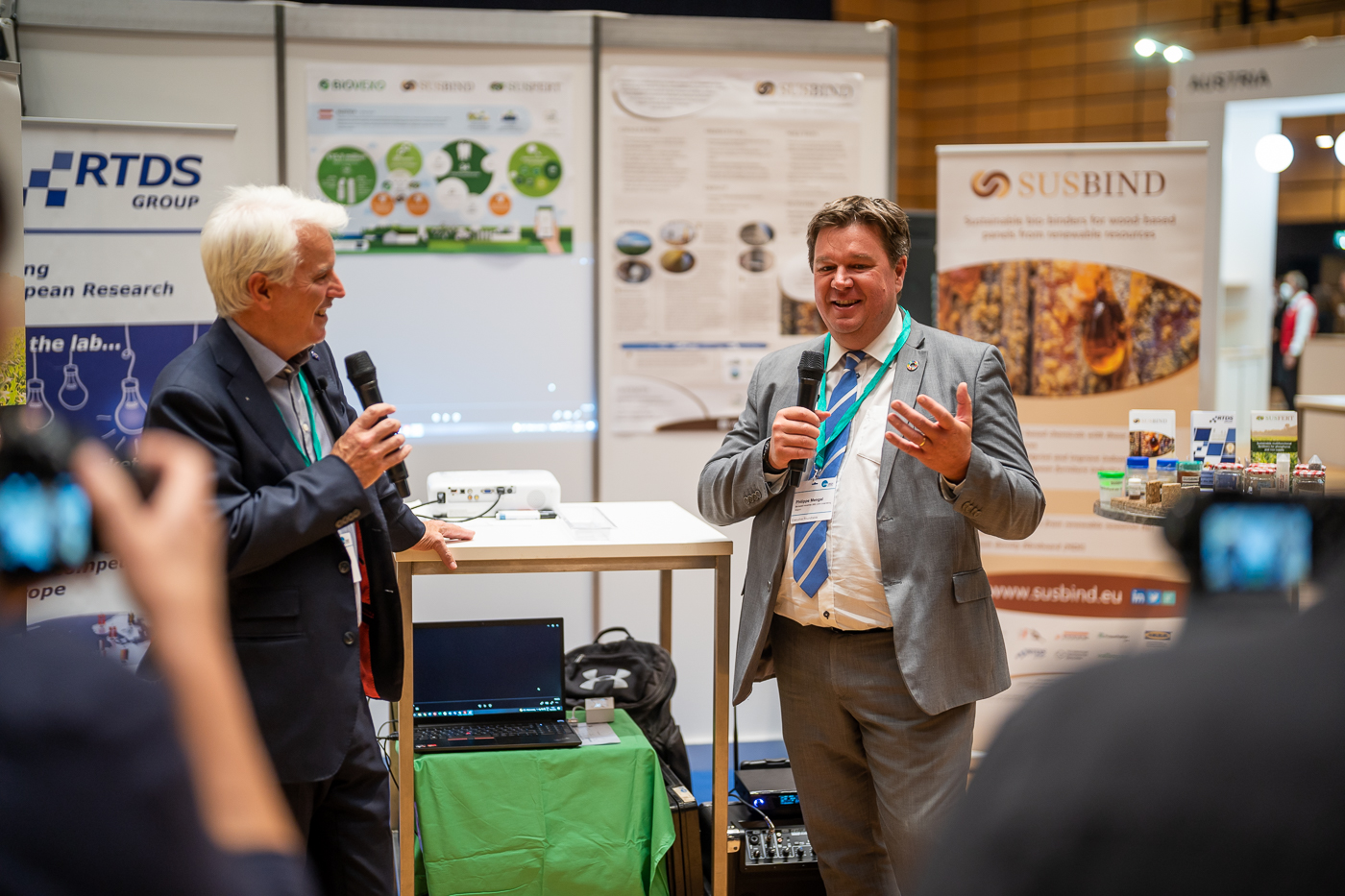 SUSFERT science and industry partners contributed to the discussion in several panels. SUSFERT partners, Acies Bio, a microbiology technology developer, and Sappi, a leading global provider of renewable wood fibre, spoke about the challenges that biotechnology faces including building value in enabling scale up and avoiding R&D bottlenecks, amongst other things.

A lively discussion was held in the session Sustainable finance: Building value and enabling scale-up where SUSFERT partner, AciesBio Senior R&D Manager, Martin Kavšček, shared insights into methods Acies has perfected to turn industrial biotech projects into commercially viable products. Participants in this session talked extensively about the difficulty in attracting adequate funding and investments for start-ups and SMEs in the bio economy. One particular person commented that the only sector not present in the room were the banks!

“At Acies Bio we recognize that generating diversity is only the first step towards disrupting the markets and creating value. Among millions, you have to identify the variant with an optimal phenotype, choose the suitable chassis strain and feedstock, develop an industrial bioprocess and finally bring it to scale. These will be the real bottlenecks in the next decade.”

SUSFERT partner, Chemical Engineer Biorefinery Sappi Europe, Nikolaus Schwaiger, spoke about the significant developments on “Lignosulfonate-based polymers in the biobased economy” in the session titled In the spotlight: Sharing circular bioeconomy best practices. Schwaiger was also present in the final podium session OUTLOOK: The pathway to the future for industrial biotechnology. He talked about Sappi’s commitment to the bio economy. 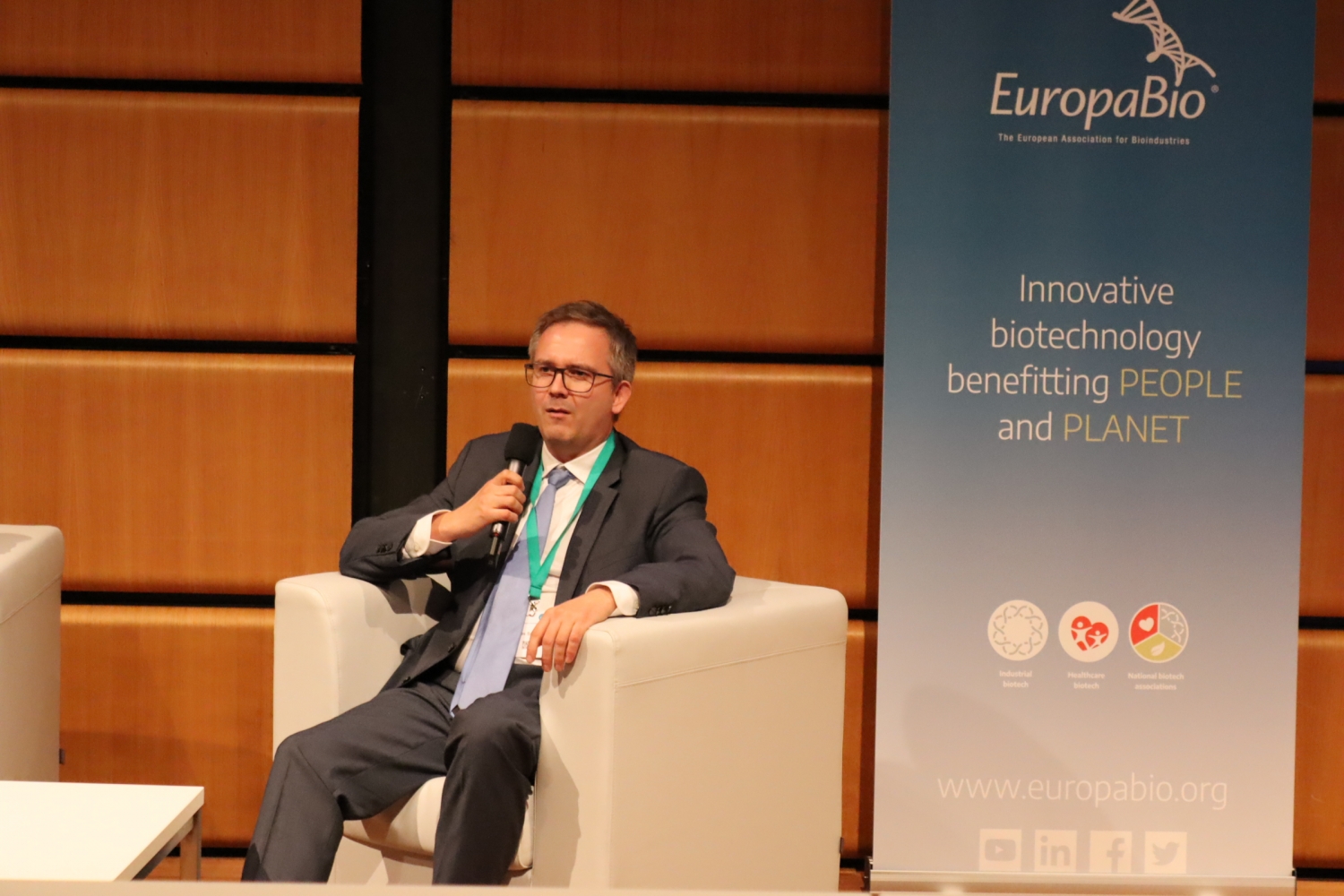 “Our products are manufactured from wood-fibre, sourced from sustainably managed forests and plantations, in production facilities powered, in many cases, with bioenergy from steam and existing waste streams, and many of our operations are energy self-sufficient,” Schwaiger said.

Schwaiger was joined on the podium by the BBI-JU Executive Director, Philippe Mengal, Cargill Sustainability and External Affairs Director, Marty Muenzmaier, and the Lithuanian Vice-Minister of Economy and Innovation, Jovita Nelkiuspšenė. 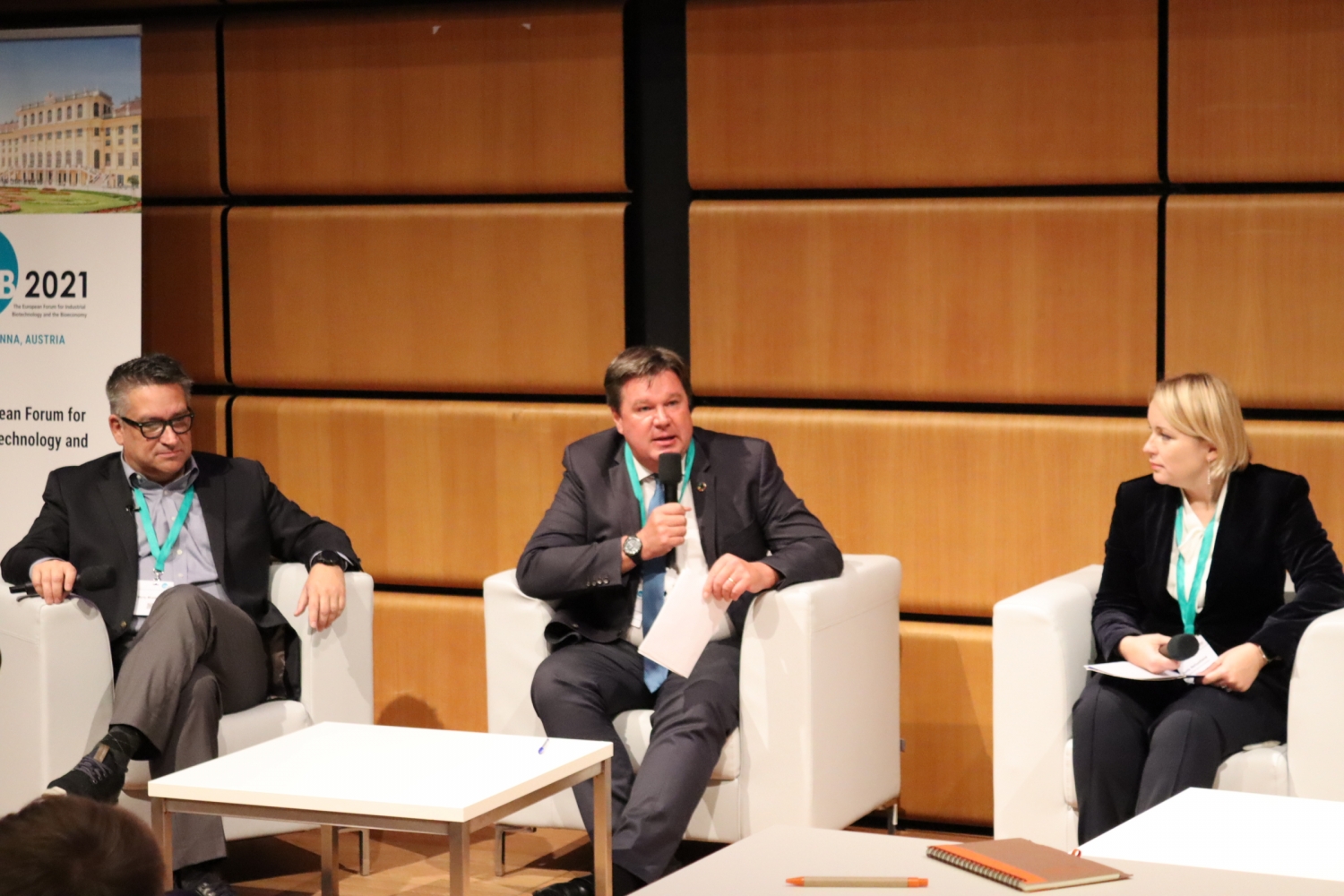 From left to right: SUSBIND partner, Cargill Sustainability and External Affairs Director, Marty Muenzmaier, BBI-JU Executive Director, Philippe Mengal, and the Lithuanian Vice-Minister of Economy and Innovation, Jovita Neliupšenė on the podium in the final session. Muenzmaier said he felt energised after being at the EFIB Forum.

EuropaBio Director General, Claire Skentelbery, was dynamic in her role as chairperson leaving participants optimistic about the future of biotech. Many participants commented on the success of the break-out sessions where like-minded companies and potential partners could meet. 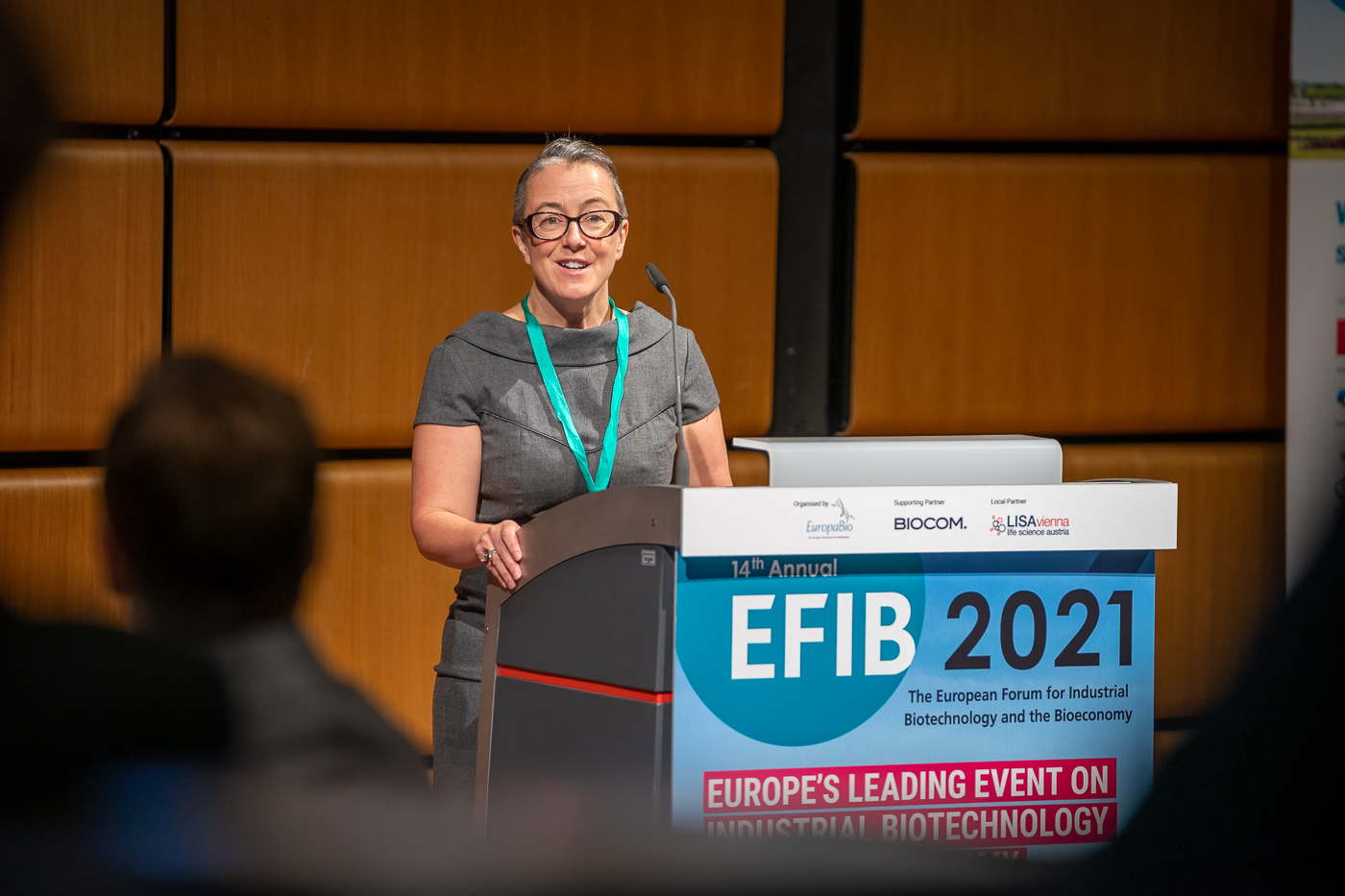 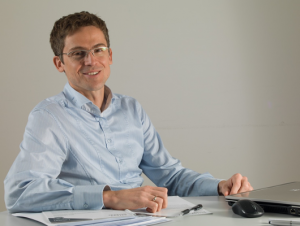 SUSFERT partner, Acies Bio Director for Research & Development, Gregor Kosec, speaking before the event, said that the time was ripe for synthetic biology and industrial biotechnology.

“Never before have so many hopes been laid into our ability to partner with nature and engineer microbes to produce most of the things that make our life comfortable, and that we are currently generating from fossil fuels. The need and desire to change are finally here among most developed economies and societies,” Kosec said.

“But I ask myself whether biotech R&D is living up to the challenge. The past two decades have seen an enormous increase in our capacity to harness and artificially generate a great diversity of enzymes, metabolic pathways and microbial cells at ever-decreasing costs. We are seeing fantastic scientific breakthroughs in the types of bioproducts that cell factories can produce, from new medicines to fragrances, colourants, agriculture biologicals and more. Nevertheless, we are still not seeing industrial biotechnology, on a massive scale, outcompeting 20th-century chemical production processes based on fossil fuels and depreciated production facilities.

He continued that the bottlenecks were able to be overcome using Acies Bio’s integrated SmartRoute  R&D platform by bringing value to SynBio platforms and projects like OneCarbonBioTM or SUSFERT. “We are able to quickly advance towards commercially applicable technology by combining our passion for understanding diverse microbes, automating phenotype selection procedures on microfluidic scale and quickly scaling up to several m3 scale,” he explained.

SUSFERT is developing new biobased fertilisers to reduce dependency on unsustainable phosphorus imports into the EU. These fertilisers include novel controlled-release coatings from lignin as well as lignosulfonate-based soil improvers originating from wood pulp.  Waste sidestreams such as struvite is utilised to substitute imported phosphorus. The loss of nutrients from fertilisers in agriculture are being addressed by using probiotics to increase nutrient availability as the demand for food and feed rises.

SUSBIND is a collaborative European research project in the field of bioeconomy that aims to replace conventional fossil-fuel binders currently used for wood-based panel boards in furniture with highly sustainable bio-based binders.

With a PhD background in molecular biology Dr. Kosec is a co-founder and Director for Research and Development at Acies Bio, a leading European company in development of industrial microbial strains and bioprocesses. He is responsible for managing and co-ordinating research activities of the company, primarily innovative bioprocess technology solutions and discovery of novel bioactive compounds. In addition to internal research projects Dr. Kosec is overseeing R&D-intensive industrial collaborations of Acies Bio with the industry partners. He is also managing the IP portfolio of Acies Bio, consisting of several patent applications and granted patents, in most of which he also actively participated as inventor.

His scientific interests are focused on improving the understanding of metabolic, biosynthetic and regulatory pathways in microbial cells. In line with Acies Bio’s focus on circular economy-inspired solutions for industrial biotechnology Dr. Kosec has co-invented innovative technologies for using non-standard feedstocks as fermentation substrates. The most advanced example of such technologies is Whey2Value, which uses acid whey for fermentative production of vitamin B12 and has been scaled up and partnered with a large animal nutrition company.  In the last 15 years Dr. Kosec and Acies Bio team have developed numerous innovative solutions for microbial production of high value compounds in collaboration with more than 50 industrial partners, including biggest international chemical, biotech and agtech companies.

With a background in chemical engineering, a PhD in process engineering and a post-doc in environmental technology, Nikolaus is responsible for biobased processes at Sappi EU R&D, located at Gratkorn Mill in Austria. His main focus is based on lignosulfonate polymerisation projects, as well for alternative pulping processes. Additionally, he is teaching recycling at Graz University of Technology and he is supervisor of several PhD and master students in all environmental and sustainability related fields of chemical engineering.

This project has received funding from the Bio Based Industries Joint Undertaking under the European Union’s Horizon 2020 research and innovation programme under grant agreement No 792021.