SUSFERT and BIOVEXO projects were in Graz, Austria last week, 14 to 16 November, 2022 for the European Summit for Industrial Biotechnology (ESIB) and the parallel event, the 11th Conference on Fiber and Polymer Biotechnology (IFPB), which is part of the Summit. The third event held within the Summit was Pichia.

ESIB is organized and managed by the Austrian Centre for Biotechnology (acib) which is funded by several Austrian universities and research centres. It was estimated that the event attracted around 600 people over the three days with a stakeholder audience split between academia, industry and policy within a diverse range of industrial biotechnology sectors.

Hall filling up before the science flash session began.

The pitches were captivating because the speakers were, as described, only given three minutes to pitch their project, or idea. As their time came to an end, the lights dimmed for a few seconds, and the microphone was cut as the speaker raced to end his or her sentence. Some made it and others didn’t. The time pressure added an exciting and humorous aspect to the pitch.

The format offered the audience an easy-to-understand alternative to the science presentations given at the event. 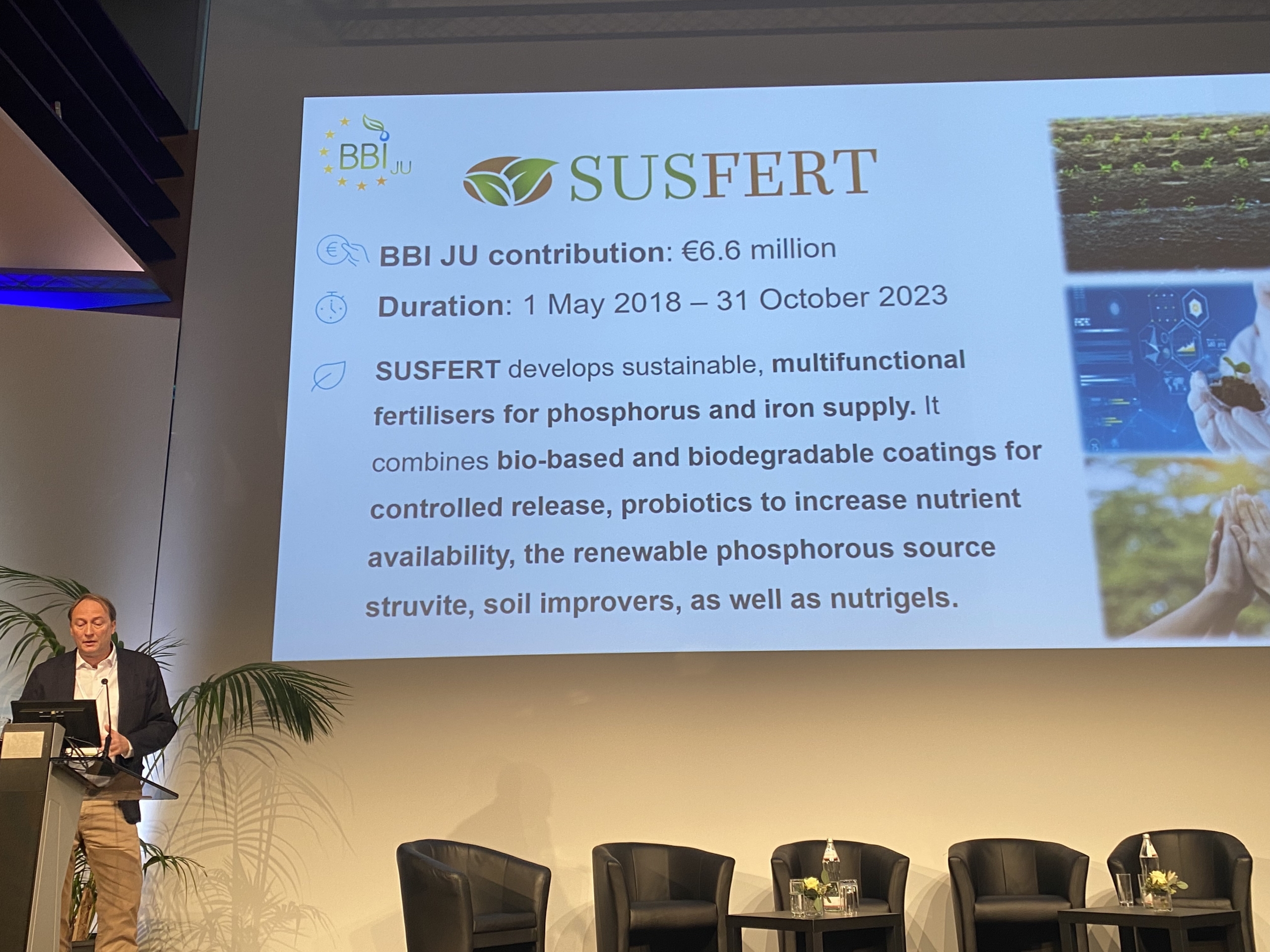 SUSFERT and BIOVEXO projects are both co-ordinated and DEC-led by RTDS. The stands were situated in the EU corner. 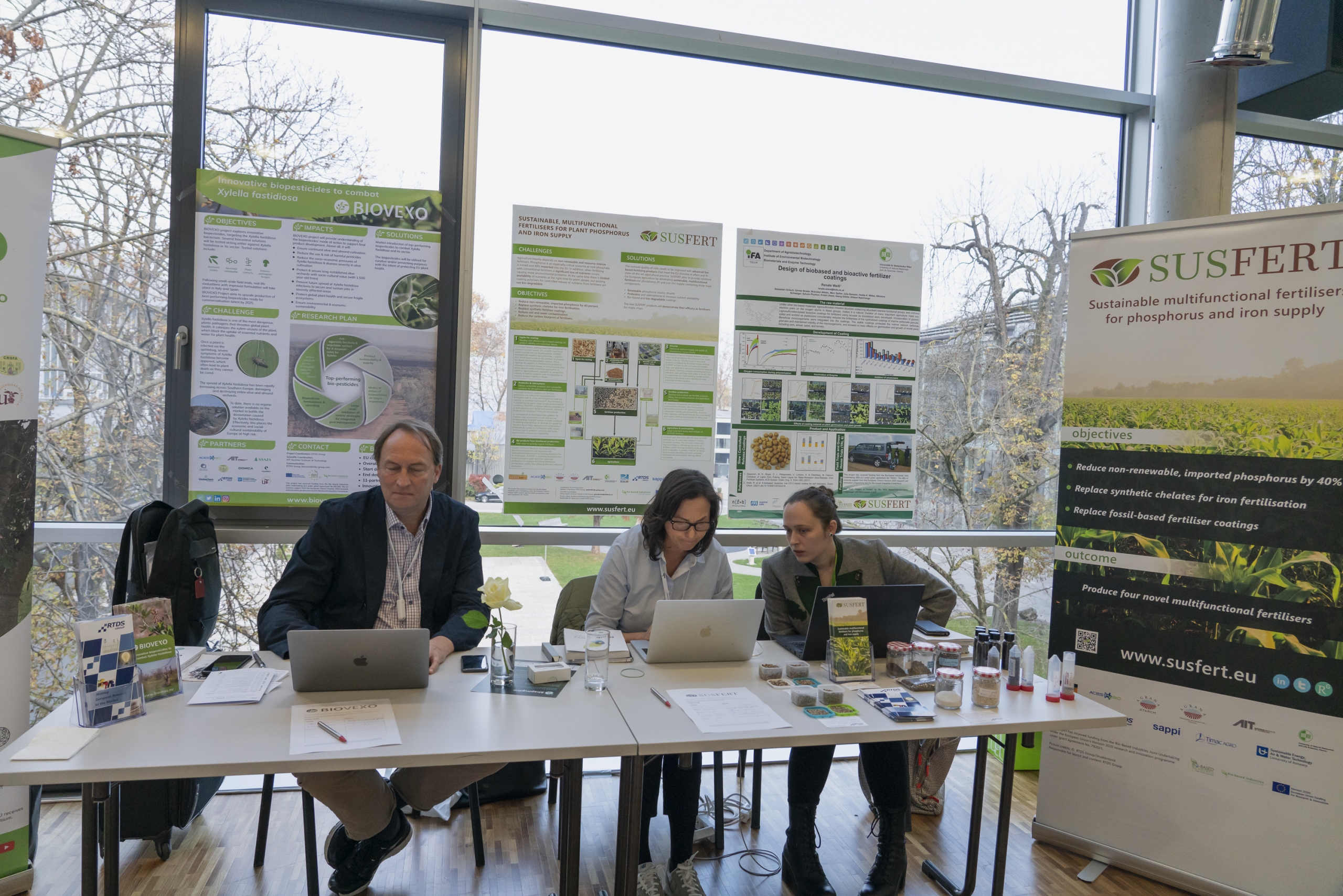 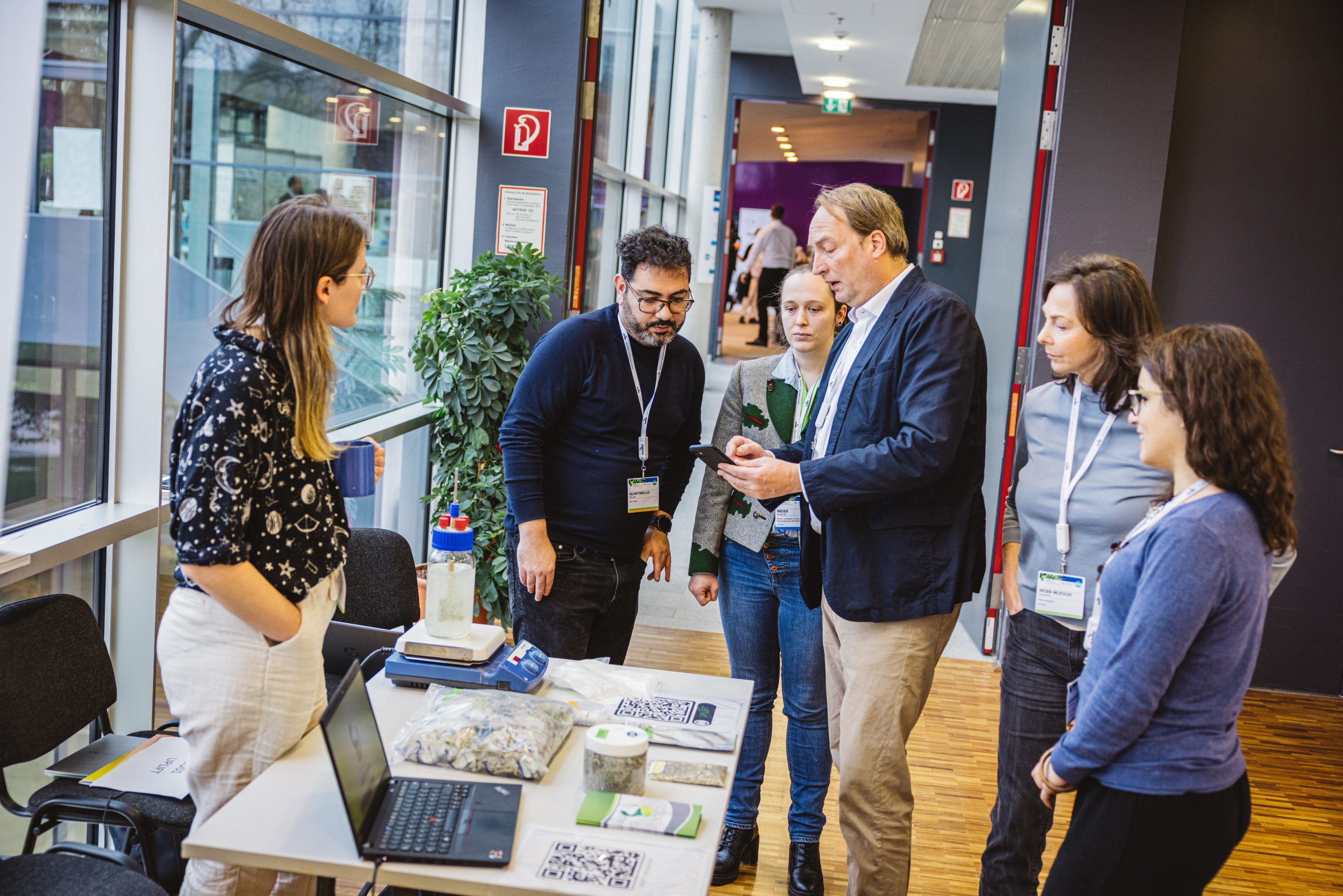 At fellow Horizon 2020 UPLIFT’S stand in the EU corner. UPLIFT is involved in the de-polymerisation of plastic packaging to convert it into renewable polymers. Photo: ESIB.

The SUSFERT pitch which outlined the project’s Key Exploitable Results drew a lot of curious people to the stand. 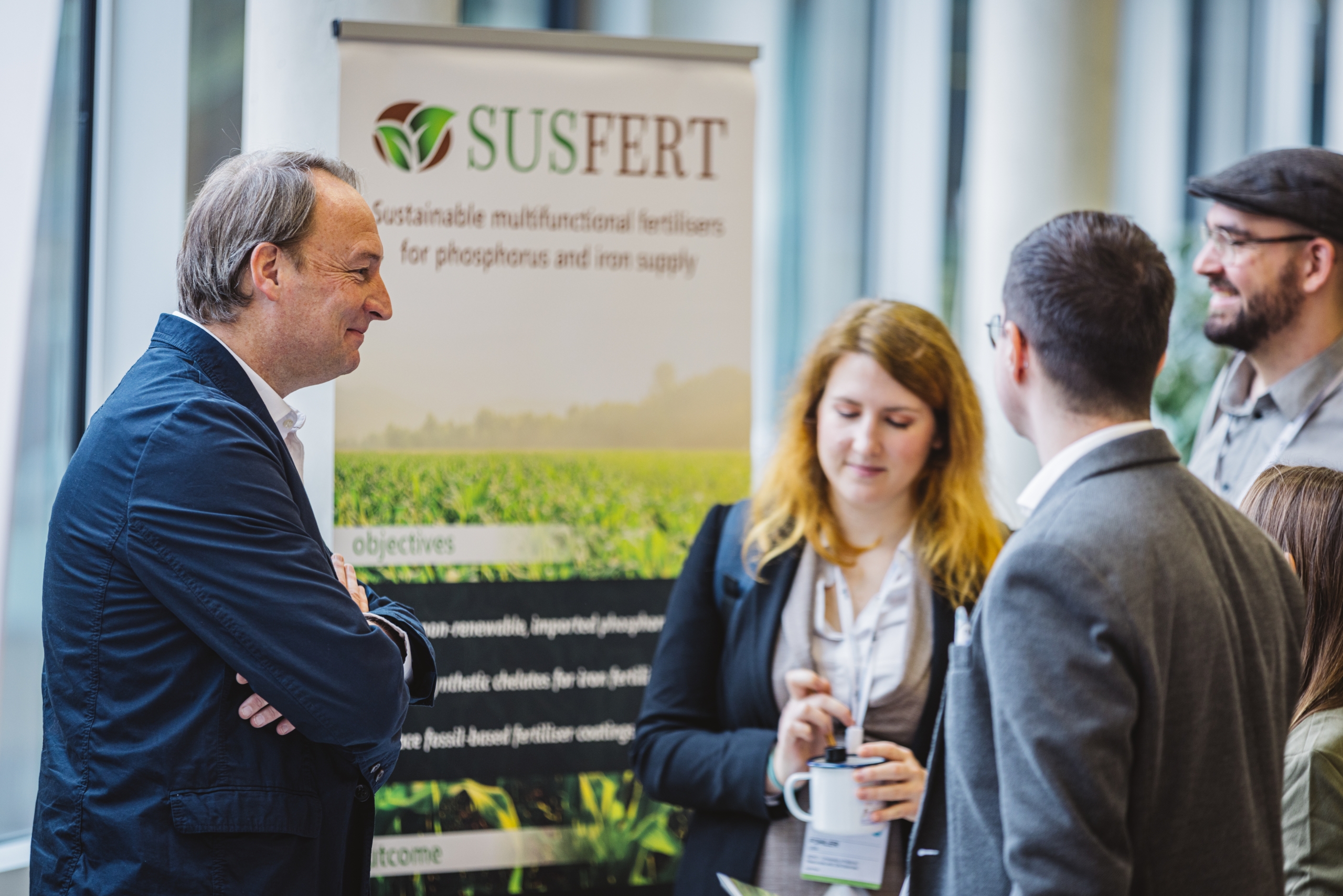 Many questions were asked about struvite as a renewable substitute to phosphorus.

Audience loved seeing the SUSFERT field trial components and fertilisers on the table.

People were surprised that such projects exist.

Concerned participants from several Mediterranean countries told sad stories of how their family olive groves have been affected and even destroyed by the Xylella fastidiosa bacteria which is transmitted via the spittlebug vector.

Families and friends of olive farmers searching for answers to Xylella. They want to pass on solutions.

On Tuesday, 15 December, SUSFERT partner and post doc BOKU researcher, Renate Weiss, presented in the Biobased Polymer session of the IFPB. The title of her presentation was “Enzyme based processes for value-added products from lignins”. She explained the SUSFERT fertilisers and coatings currently under development, including related lignocellulose and enzyme research from other projects led by the University of Natural Resources and Life Sciences, Institute of Environmental Biotechnology in Tulln. 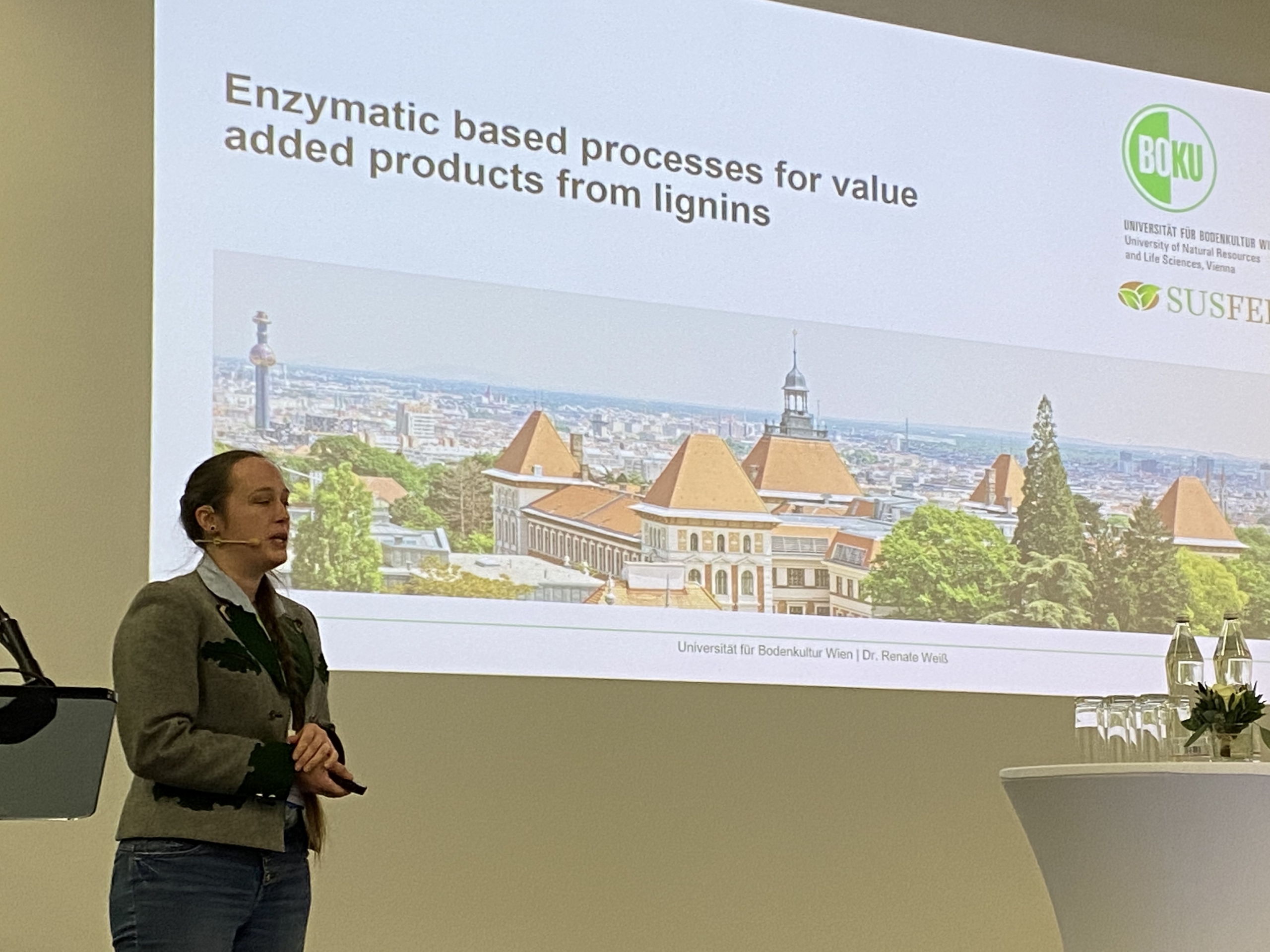 She was joined in this session by Rita Mota from acib who presented “Cyanoflan: a marine cyanobacterial polymer for skin well-being” and Claire Moulis from the Toulouse Biotechnology Institute, who presented “Sucrose bioconversion in high-added value alpha-glucans using engineered bacterial enzymes”.

SUSFERT partner and Head of the BOKU Department of Agrobiotechnology, Professor Georg Gubitz, closed the session. An interview conducted with Professor Gübitz at ESIB will be available on this news feed in the coming weeks. 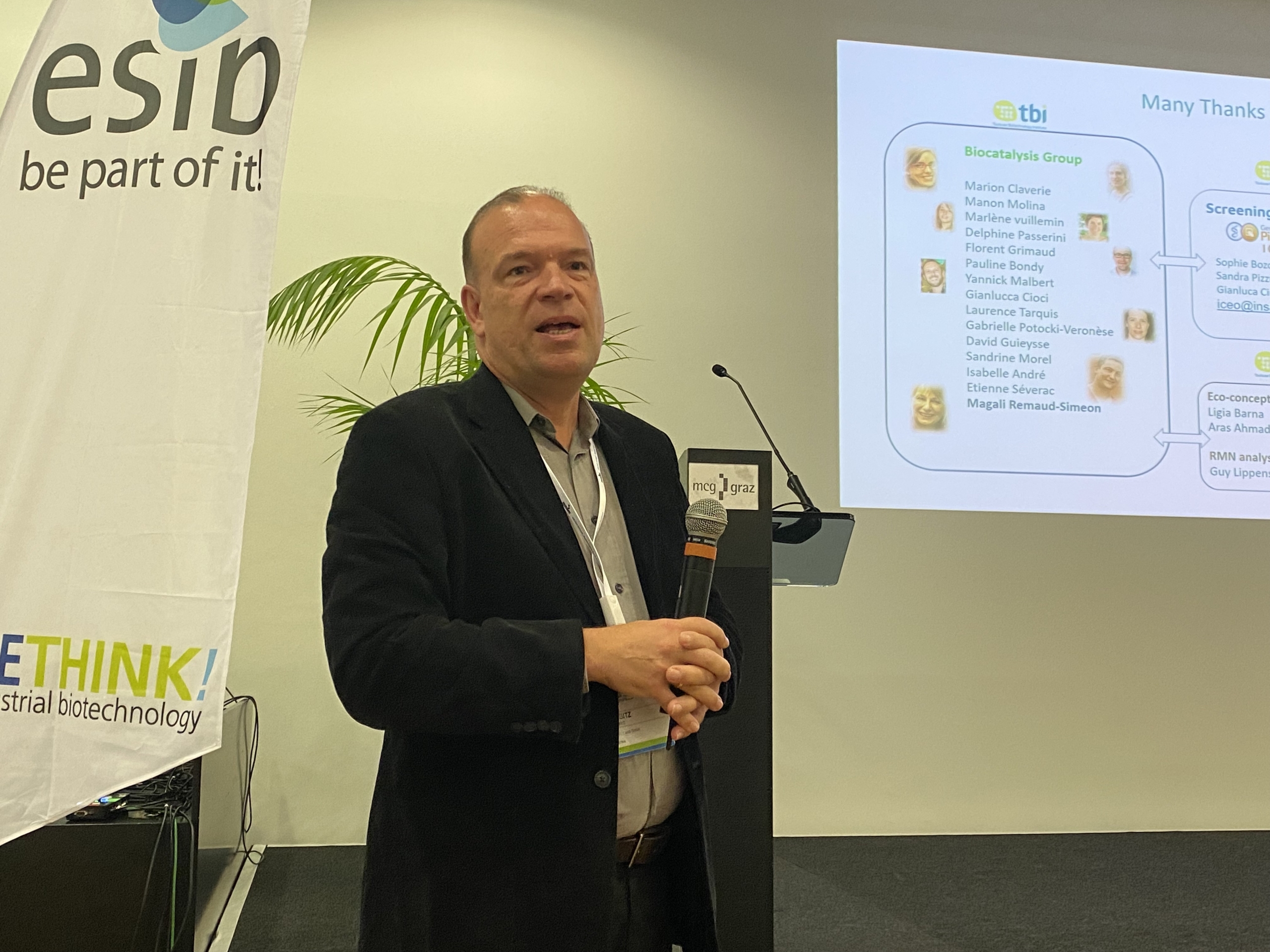 Weiss travelled directly from ESIB to St. Pölten to receive second place for the Young Researcher Impact Award from the Society for Research Promotion, Lower Austria (GFF NÖ), or Gesellschaft für Forschungsförderung Niederösterreich (GFF NÖ). This event will be covered in the next SUSFERT news story.

Renate Weiss speaking at the award ceremony where she took second place for her research on enzymes as a substitute for environmentally harmful chemicals. Copyright: Gesellschaft für Forschungsförderung Niederösterreich m.b.H./APA-Fotoservice/Haslinger. Fotograf/in: Markus Haslinger.