STRUVITE — Contribution to the circular economy

You are here: Home1 / STRUVITE — Contribution to the circular economy

STRUVITE — Contribution to the circular economy

The European Union (EU) has designated phosphorus (P) as being a critical raw material not only because it is an essential nutrient, but also because it is a non-renewable raw material, for which some estimates suggest that supplies will rapidly decline within the next century. The major user of P is the agricultural sector for its use mainly as a macronutrient in fertilizers.

In line with EU funding objectives of achieving the goals of a circular economy with its fundamental principle directed at zero waste, projects like SUSFERT www.susfert.eu have been funded to research and develop ways in which to recover this valuable mineral from waste or side streams.

It is here that the underutilized potential of P recovery lies. The P recovered from waste or side streams is often undervalued, usually being sold at below market value.

So, what exactly are scientists looking for when exploring innovative solutions in the search of new sources of P to reduce reliance on imported, unsustainable sources of phosphate rock.

Finding the P in human wastewater

One common place to find P is in wastewater, including domestic sewage, agricultural wastewater and in food wastewaters (for example, the potato industry, dairies and manures).

One method to recover P from these wastewaters is the controlled precipitation of a crystalline substance struvite (also called magnesium ammonium phosphate – MAP – as it is composed of these three chemicals in a 1:1:1 molar ratio).

In fact, struvite can even precipitate spontaneously in pipes, where it forms crystals that contain about 12.6 per cent P per dry mass (theoretical value of pure struvite).

Indeed, struvite can even be ‘produced’ by the human body as a predicament, where it is formed as kidney stones as a result of urinary track infections containing ureolytic bacteria.

In addition to its relatively easy production, struvite has been demonstrated to be an effective P fertilizer especially in acidic soils. It is also considered a slow-release fertilizer that can reduce P losses to the environment[1].

The attractiveness of struvite is enhanced as it is in over 80 per cent of the time currently sold at values between €0–100 per tonne, a price far lower than the estimated market value of its macro nutrientswhich reach a price of around €250–412 per tonne (Muys et al. 2021). [2]

Research by Marc Spiller from the University of Antwerp, conducted within the SUSFERT project, has identified 39 EU struvite plants of the estimated 80 world-wide.

Of these 39 European plants, installations can be structured into three distinct precipitation processes. Type I receives waste activated sludge (WAS) from digestion, Type II struvite is precipitated on the dewatering liquor of the WAS digestate, and Type III struvite is sourced from agro-industrial wastewater treatment (such as in potato processing and dairy, for example) (Figure 1). 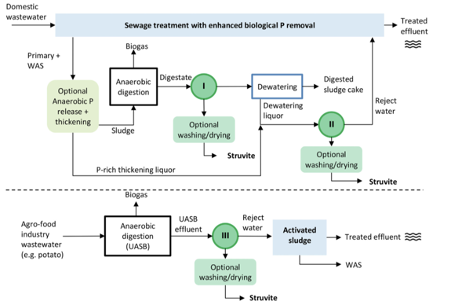 Figure 1: Three categories in which struvite recovery processes in Europe can be classified. Depending on the type of water/slurry and location of the struvite recovery process in a wastewater treatment plant (WWTP) I: on digestate of sewage waste activated sludge (WAS); II: on the dewatering liquor of sewage WAS digestate; III): after anaerobic digestion of agro-industrial wastewater. (UASB: upflow anaerobic sludge blanket). (Muys et al. 2021)

Of the 39 operational European struvite production sites, SUFSERT has sampled 24 (25 samples in total) and found that 22 struvite samples have a chemical quality that is within the legal limits set by the new EU fertilizer regulation, (with an estimated equivalent of 1250–1350 tonnes of P per year), which is considered suitable for direct use as fertilizer or as a secondary raw material for fertilizer production.

Marc Spiller, from the University of Antwerp, one of the partners leading this research, seens the potential of struvite.

“Our research suggests an excellent potential for the exploration of struvite for EU fertilizer production “Spiller said.

“In particular, the struvite that has been identified is generally of good quality, and the fact that most of this struvite meets the new regulatory requirements set by the EU is encouraging for creating an EU wide market for struvite. This could promote the further increase of struvite production across the EU,” he said.

In addition to probiotics to increase nutrient availability and the renewable phosphorous source struvite, it also combines bio-based and biodegradable coatings for controlled release.

The preliminary results from SUSFERT have shown that despite differences in the mineralogical composition of struvite, there is no significant difference between samples in terms of plant yields.

Similarly, for all struvite samples a continuous P availability over the sample period was detected, indicating the often described ‘slow release’ character of struvite.

In the SUSFERT project the renewable phosphorus source struvite will be combined with probiotics to improve P release properties and to access P soil stocks. This novel multifunctional fertilizer will be coated with bio-based and bio-degradable coatings and its efficacy will be demonstrated on a variety of crops throughout several planting

seasons. Eventually, this will result in new sustainable products for the for conventional and organic farming.

To download the extensive scientific paper on a systematic comparisons of EU struvite associated with this blog, please click HERE.

The SUSFERT project has received funding from the Bio-Based Industries Joint Undertaking (BBI-JU) under the European Union’s Horizon 2020 research and innovation program under grant agreement No. 792021.