The polymerization of lignosulphonates that are being used as coatings for fertilisers on SUSFERT provide an opportunity for further, possible circular economy valorization.

Chemical Engineer Biorefinery Sappi Europe, Nikolaus Schwaiger, explains how the currently under-utilised, wood-based lignosulphonates, an abundant side product of the sulphite pulping process in paper making, are part of a recycled chemical recovery process that strives to produce new products apart from energy use.

Lignosulphonates have wide range of applications 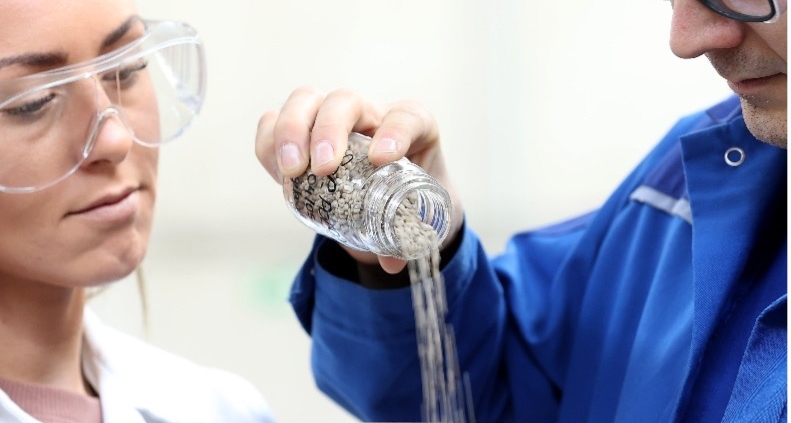 Sappi Gratkorn employees Nikolaus Schwaiger and Jacqueline Harg inspect the SUSFERT fertiliser granules that are coated with polymerised lignosulphonates. The granules have been used in recent field trials. © Sappi.

Over the duration of the project, SUSFERT partners from Sappi and the Institute of Environmental Biotechnology, from the University of Natural Resources and Life Sciences, Vienna (BOKU), have contributed research into the polymerization of lignosulphonates using a special enzyme, laccase.

Lignosulphonates are the most abundant side product of the sulphite pulping process which is carried out at the Sappi Mill in Gratkorn, Austria. Their main use up to now has been to generate energy and heat production by incineration and to recover chemicals.

For those who are curious about the Sappi chemical recovery processes, Nikolaus Schwaiger wrote an editorial that explained the company’s value-added processes and the SUSFERT project to fellow employees at the Gratkorn Mill in Graz, Austria.

The editorial, published in the Sappi “Review of the Workers Council 2021” takes a closer look at the pulp cooking process at Gratkorn. It explains how some side-stream processes that generate lignosulphonates have a wide range of applications while driving innovation potential to create new products such as fertilisers.

The original German-published editorial written by Schwaiger has been translated and edited for SUSFERT.

The scale of the Sappi Gratkorn Mill can be seen in this aerial photo. © Sappi

“It is well known that 990,000 tonnes of triple-coated paper are produced in Gratkorn every year. The fact that 250,000 tonnes of totally chlorine-free bleached pulp is produced is one of the hallmarks of the Gratkorn Mill. The scale of the operations can be seen in the picture above.

What is less well known is that the magnefite pulp cooking process generates around 2.6 million tonnes of dilute liquor annually. During this cooking process the dilute liquor is evaporated in the Utilities Department (UD) to about 550,000 tonnes of thick liquor per year. The UD is responsible for energy supply, water and chemical recovery.

Some of this thick liquor is sold as a dispersant or binder. The main part of it is burnt in the liquor boiler and the chemicals required for the cooking process, sulphur dioxide and magnesium oxide, are processed back into the cooking liquor in a recycling process which is part of the chemical recovery. A portion of the heat produced in this process supplies North Graz with district heating and is used as an energy source for the mill’s operations.

Lignosulphonates are derivates of lignin

For several years, Sappi has been undergoing a change of strategy to create new and value-added products from all side streams from its factories.

In the Sappi Mills, the thick liquor, or its preliminary stage, the thin liquor, has been the focal point of interest for research and development. 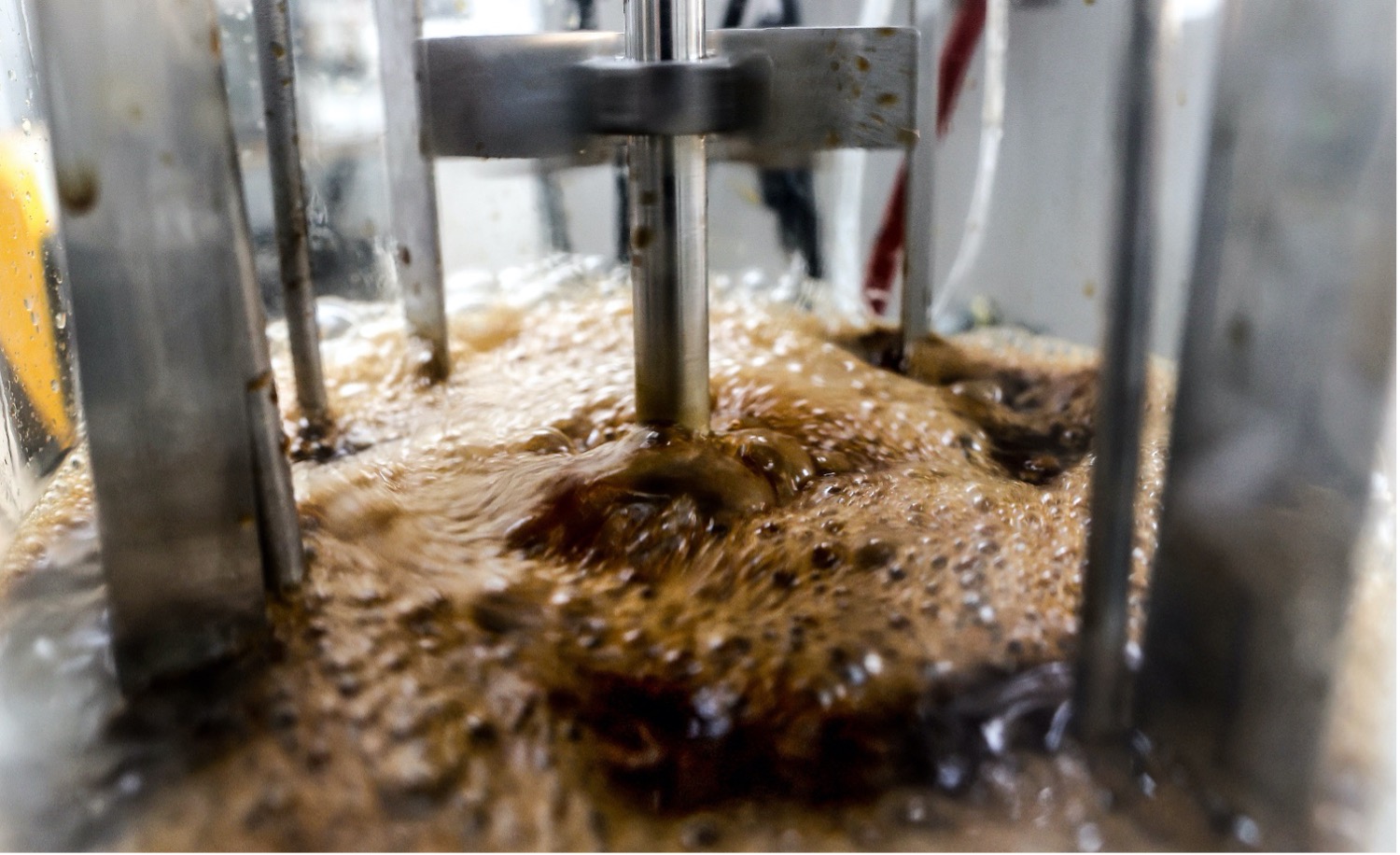 The picture shows lignosulphonates during the polymerisation process. © Sappi

Lignosulphonates make up the main component of the thin liquor from Gratkorn, as it does in the German-based Sappi plants in Alfeld and Ehingen. Lignosulphonates are derivatives (chemical modifications) of lignin, which is one of the three main components of wood besides cellulose and hemicellulose (covered in a lecture by Schwaiger at Graz University of Technology).

These compounds are naturally derived during the acidic pulp cooking process which provides the fibres for further paper production. It is during this process that the non-water-soluble lignin becomes water-soluble due to addition of sulphonic acid to the lignin, thereby creating lignosulphonates.

A few years ago, researchers from Graz University of Technology and BOKU succeeded in polymerizing these lignosulphonates. Polymerizing means putting molecules back together — simply put — big molecules are created from small molecules. For several years now, Sappi has been researching the applicability of this process in co-operation with BOKU.

First, the lignosulphonates are removed from the dilute liquor. 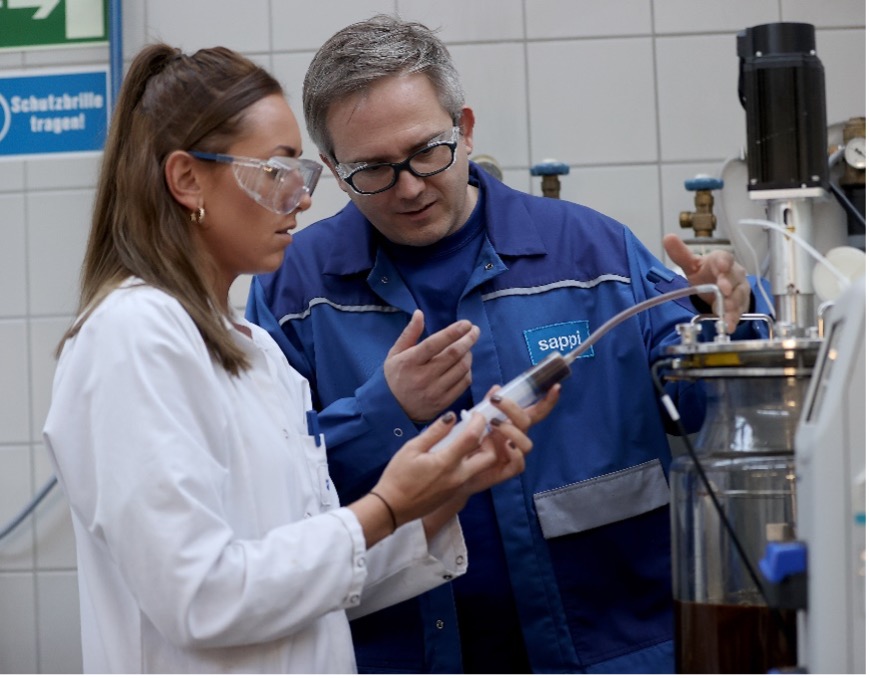 The laccase enzyme is added to the solution. © Sappi

The lignosulphonates change their properties. Depending on the process parameters, a wide variety of properties can be designed for multiple purposes.

In SUSFERT, funded by Horizon2020 and the BBI-JU, we are working with partners from countries of the European Union to develop innovative fertilisers that are coated with polymerized lignosulphonates.The development has already progressed so far that the fertilisers could be tested in field trials in Marchfeld and in France. The results are very encouraging, although researchers still have a lot of work to do,” Schwaiger concluded. 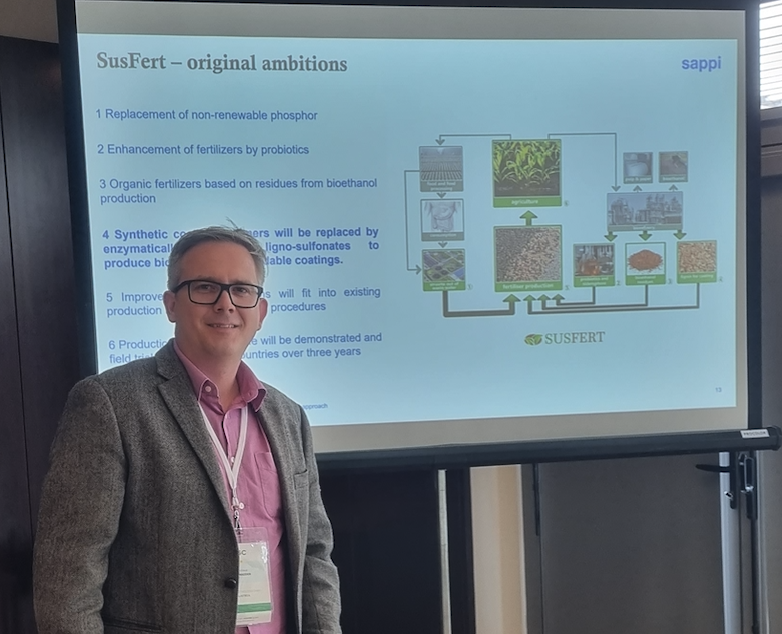 The ISGC is organised by the leading global research institute, the National Center for Scientific Research, or CNRS, which falls under the responsibility of the French Ministry of Education and Research.

In a previous news story, these processes were summarised by BOKU PhD student, Sebastian Mayr, in his presentation to a scientific audience in Cologne titled: Functionalization of technical lignins using various laccases of different origin.

Mayr explained that by choosing the right laccase, an extension of the process to other types of technical lignins is possible.

In other words, “the properties of lignosulphonates can be tailored in numerous ways by selecting the respective functional molecule for enzymatic coupling”.

The news item also detailed BOKU’s presence at the Austro Paper and Biorefinery Conference and Trade Show 2022. It was here that the paper and pulp industry audience showed “considerable interest” in the introduction of sulphur in the polymerisation process.