Lignosulphonates are the most abundant side product of sulphite pulping in the paper making process. They have many applications including the possible use in fertilisers.

SUSFERT partners from the Institute of Environmental Technology at the University of Natural Resources and Life Sciences (BOKU) have been busy over the last period attending industry and science conferences in the dissemination of their research.

“A tree consists of about 40% cellulose and 40% lignin. The lignin is currently under-explored and is mainly burnt for energy production. That is why there is a major goal to develop modern technologies for the upgrading of lignins to create value-added materials,” Weiss told SUSFERT Communication.

SUSFERT project partner Sappi is the supplier of the lignin which comes from the Gratkorn Mill in Graz, Austria. The company also has key research staff who work with BOKU to develop new ways to use lignins that should contribute to additional value streams and circular economy concepts. The events below are a snapshot of what BOKU has been doing at conferences and trade shows. 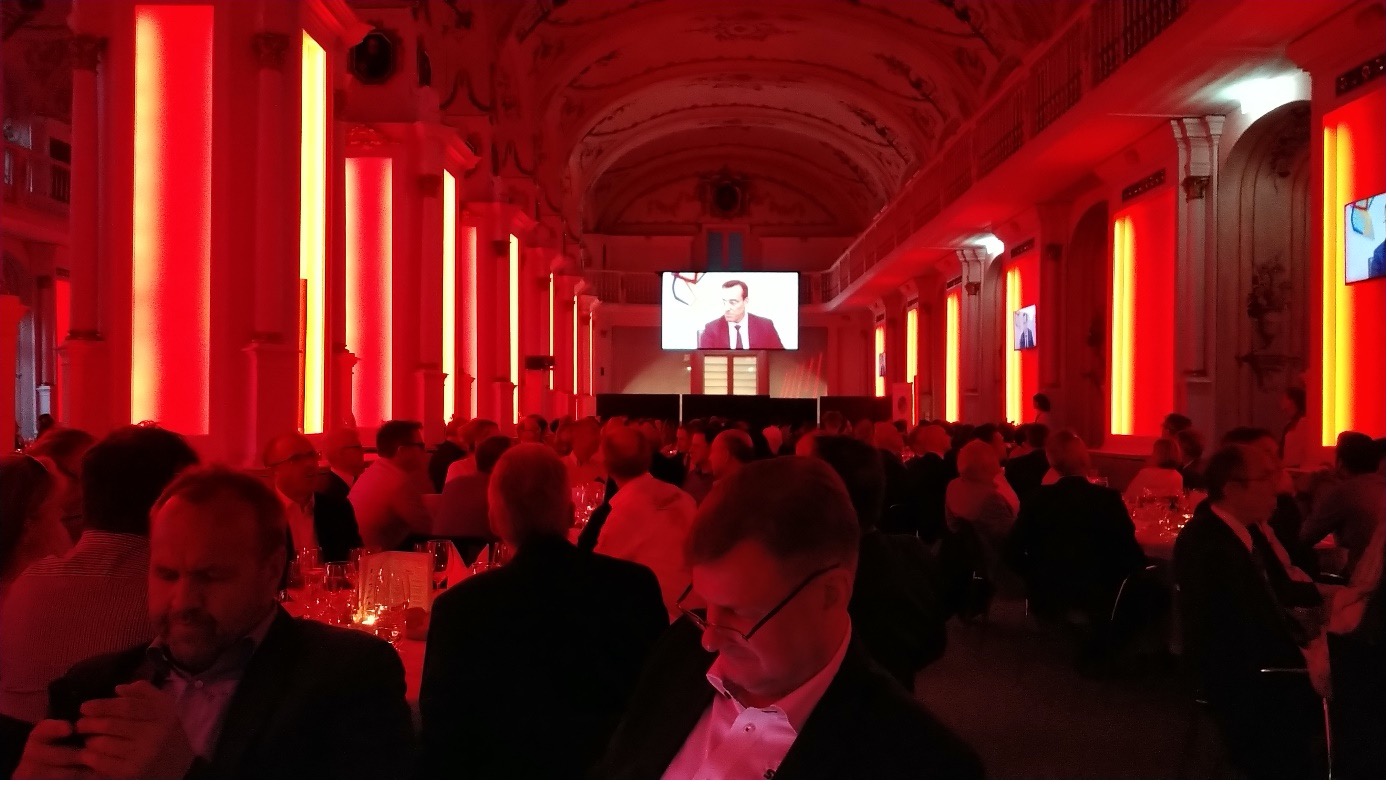 The Austro Paper & Biorefinery Conference & Trade Show brought together around 500 participants from the paper and pulp and associated industries who showed a significant interest in the cellulose technology & wood-based coating that has been developed on SUSFERT. © Renate Weiss

Weiss participated at the Austro Paper and Biorefinery Conference and Trade Show 2022. The event took place in Graz over the 18 and 19 May, 2022. She presented the novel coatings containing lignosulphonates that have been developed by the project partners, and tested on SUSFERT for agricultural applications.

Lignosulphonate-based bioactive coatings for soil improvers for lawns were developed using laccase as a biocatalyst. Incorporation of glycerol, xylitol and sorbitol as plasticisers considerably reduced the brittleness of the synthesised coatings of marine carbonate granules, while thermal enzyme inactivation at 100 degrees centigrade enabled the production of a stable coating.

Enzyme-based synthesis of lignosulphonate fertiliser coatings are multifunctional, bio-based, bio-active and non-toxic. They have been tested for a reduction in fertiliser leaching.

CO2 savings of up to 3.4 CO2-eq. kg/kg product were realised compared to fossil products.

The results that arose from this publicly funded (Horizon2020/BBI-JU) research were published in the Green Chemistry Journal last year. The development of the soil improver coating was described and its application in grass field trials was shown.

According to Weiss, the audience at the Conference showed considerable interest in the technology. Questions were raised concerning the bio-degradability of the coating, and the introduction of sulphur with the lignosulphonates. The economical aspects of the natural plasticisers were also a topic of interest.

It was estimated that around 500 people attended the event where industry counted for the most participants which is understandable considering that Graz is home to one of Sappi’s largest pulp and paper mills in Gratkorn.

More can be read about the Gratkorn Mill in the last Consortium news event. 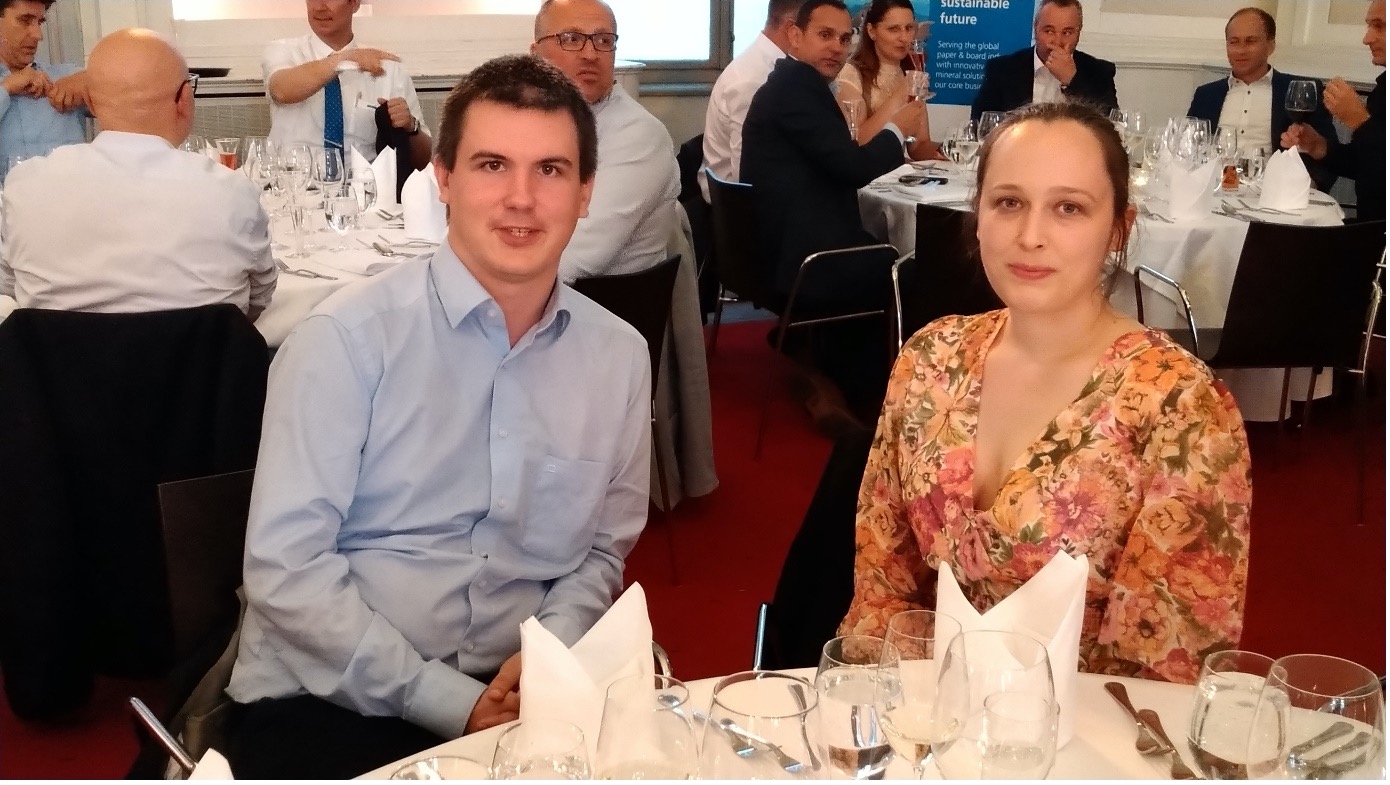 The SUSFERT BOKU team from the Institute of Environment Technology presented to a mainly scientific audience at Oxizymes Conference in Siena, Italy in July to further research into the technical application of oxidative enzymes and lignins.

It was estimated that around 125 scientists attended this conference. 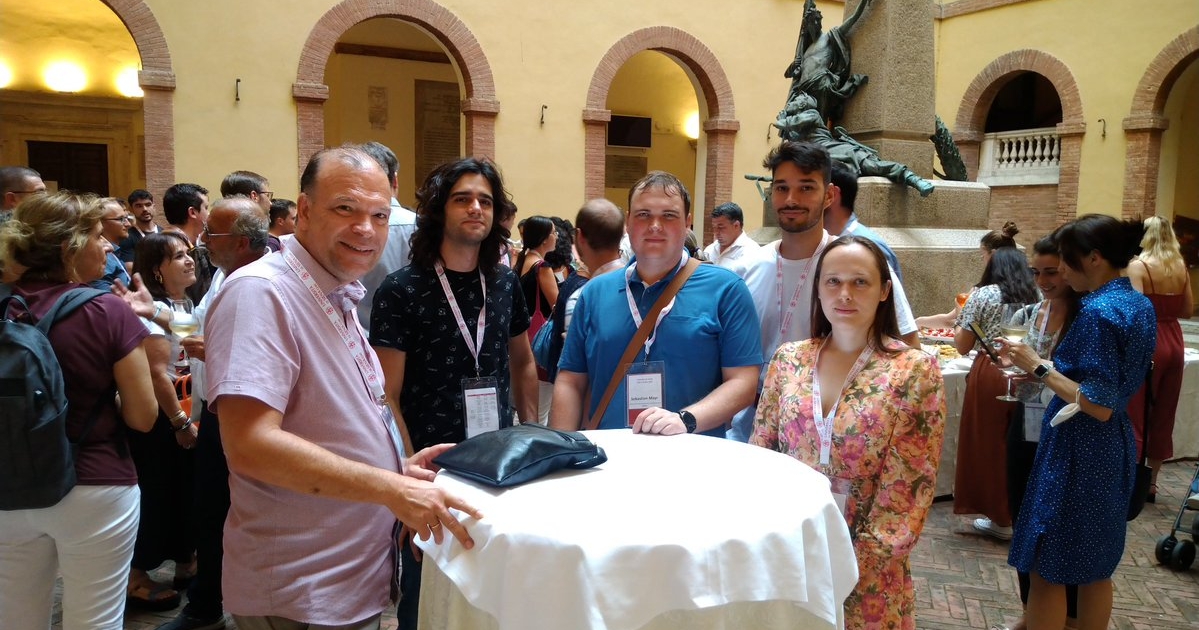 Oxizymes are enzymes that perform oxidation reactions with oxygen and peroxides. Due to this, they are of interest to many industries, as they offer a wide variety of applications.

Schematic representation of laccase catalytic cycle: The oxidation of four substrate molecules to the respective radicals leads to the formation of two molecules of water from molecular oxygen. Copyright Elisa Ghitti.

This graphic shows the reaction mechanism in laccases (one type of oxizymes). The four copper atoms constitute the active centre of the laccase enzyme. At the active centre two oxygen particles are reduced to two water molecules as the substrate (in our case lignin) is oxidised.

BOKU PhD student, Sebastian Mayr, presented at the Biocatalysis for the Biological Transformation of Polymer Science scientific conference held in Cologne, Germany from the 27 to 29 June, 2022. The title of his paper was “Functionalization of technical lignins using various laccases of different origin”. Mayr elaborated on how modified lignins could be used for high-value applications, such as in hydrogels/coatings and adhesives, apart from many other uses.

The properties of LS (lignosulphonates) can be tailored in numerous ways by selecting the respective functional molecule for enzymatic coupling.

By choosing the right laccase, an extension of the process to other types of technical lignins is also possible.

With these approaches a variety of high-value and sustainable applications of such modified lignins are possible. 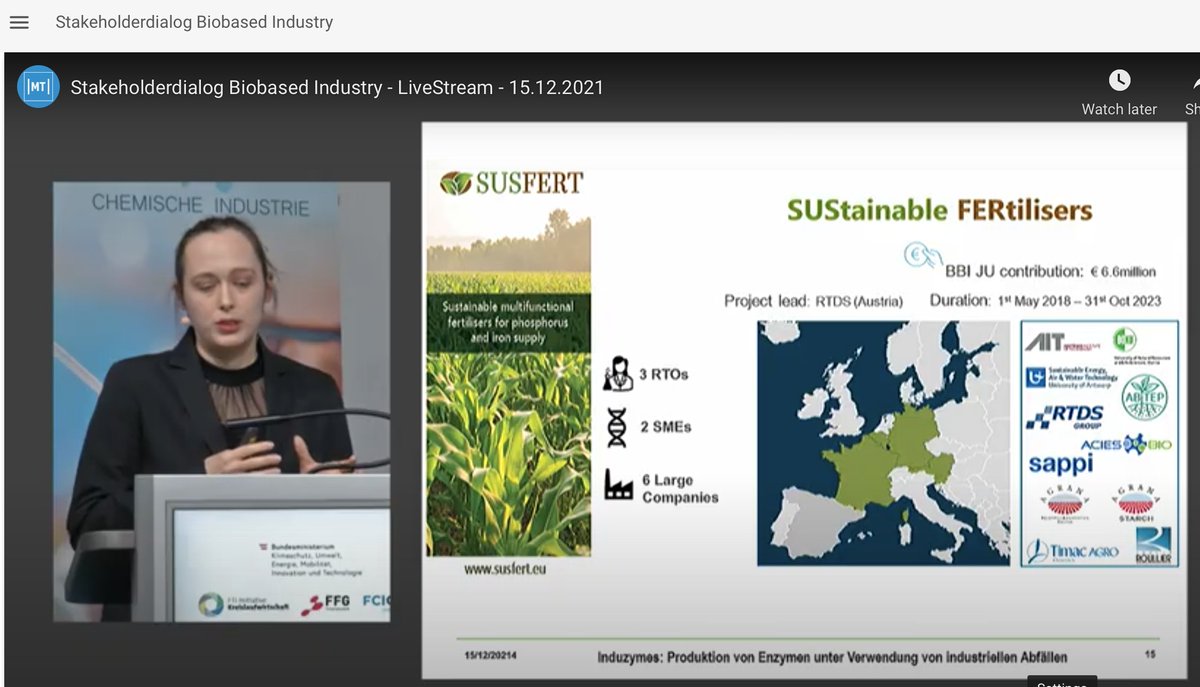 Weiss presented the FFG Induzymes and SUSFERT projects, which examine the use of enzymes for industrial applications. The main focus of the presentation was the exploitation of industrial side products such as cellulose fibres from the recycling paper industry and porcine blood from slaughter houses for enzyme production.

Weiss showcased the use of the produced enzymes for various applications in material development and industrial de-inking.

For those who missed the opportunity to be there, the event can be viewed HERE on the YouTube link.

The FFG circular economy initiative was sponsored by the Austrian Ministry for Climate Protect, Environment, Energy, Mobility, Innovation and Technology (BMK) in co-operation with the Professional Association of the Chemical Industry (FCIO).