SUSFERT held its 9th Consortium Meeting in the Austrian city of Graz, home to six universities and to project partner Sappi, which is situated in the nearby town of Gratkorn.

Graz has become a vibrant city over the last 20 years, helped by its status as European Capital of Culture which was cemented with the building of the Kunsthaus gallery in 2003. Part of the facade of the building is captured in the photo below.

The city is considered as being one of the best preserved historical cities in Europe. It is home to two UNESCO World Heritage sites, the old town in the city centre and the castle of Eggenberg. Consequently, in 2011 Graz was granted the accolade of UNESCO City of Design.

Known as Vienna’s little sister city, Graz has become an attractive place to live for over 331,000 residents, according to the city’s fact portal. The living experience is urban, yet friendly, without the congestion and affectation that Vienna is known for.

With many SUSFERT Consortium members living in Vienna and in Graz, it seemed fitting that the Consortium visited the city and experienced Sappi’s impressive state-of-the-art Gratkorn Mill.

The hybrid face-to-face and virtual meeting kicked off with the results of the SUSFERT review that was summarised by the SUSFERT Project Manager, Mikael Muegge, chairing the meeting below. The report acts as a useful directive for Period Four. 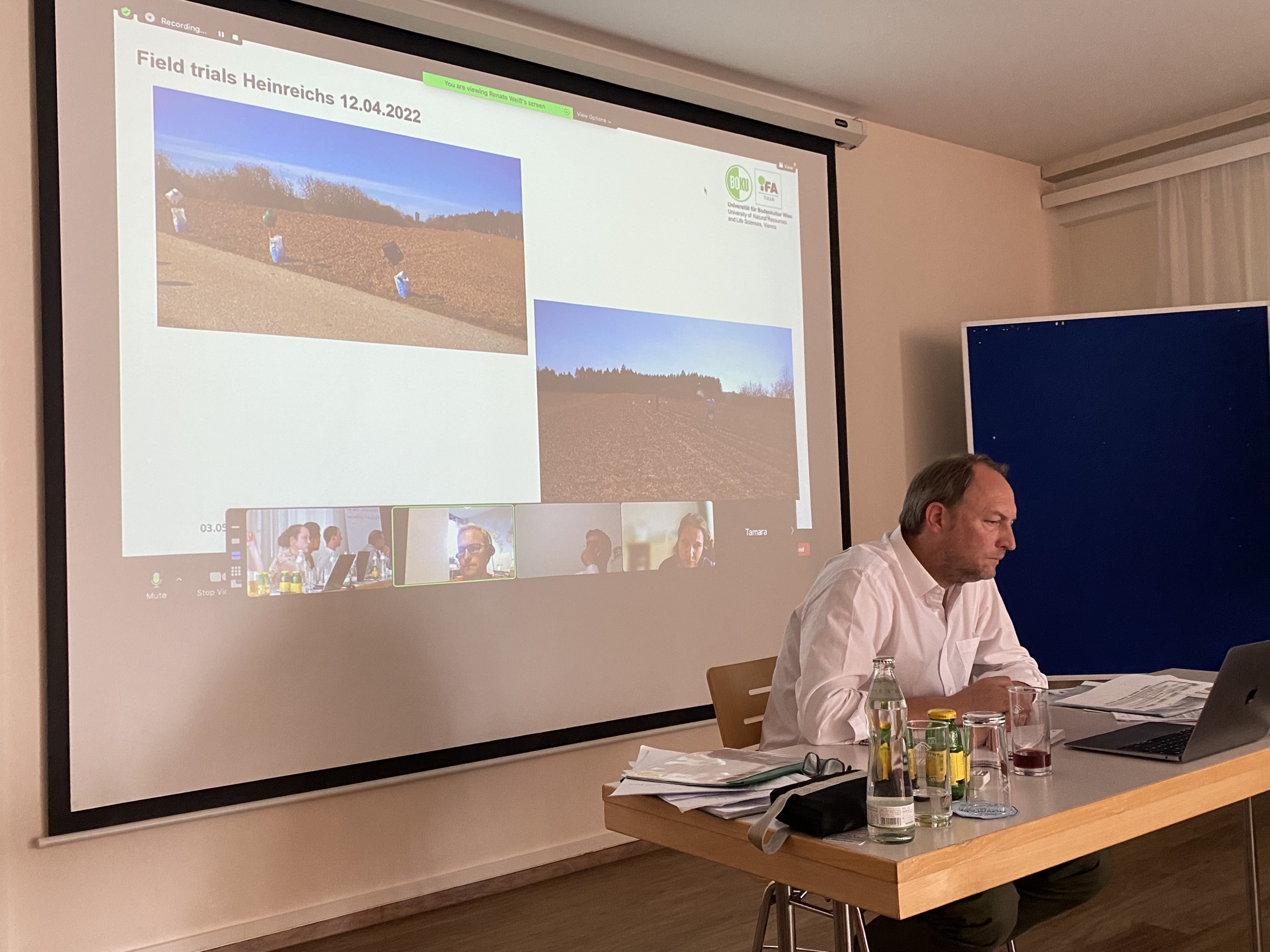 The project is entering the final stage of its work that will assess two additional growing seasons. One is already underway, having been planted in Spring 2022: SUSFERT Field Trial Summary. Additional field trials will be sown in Spring 2023 to reflect the decision taken in 2021 to extend the project by six months to be able to further validate the replicability potential of the results.

In addition, subject to the approval of a planned, current amendment, plans are underway to also include lignosulphonate-based nutrigels from project partners BOKU and Sappi, with AgroBiogel in the field trials in 2022 and 2023.

Sappi hosts, Melissa Horvat and Nikolaus Schwaiger, pictured below on the right, organised the 9th Consortium Meeting in Graz.

Schwaiger and Horvat contribute their research expertise to the field of wood-based lignosulphonates for fertiliser coatings on the project. Sappi supplies markets with lignins for many industrial applications.

They are sitting with with BOKU researchers, Renate Weiß; Hoang Duy Pham; and Sebastian Gritsch. 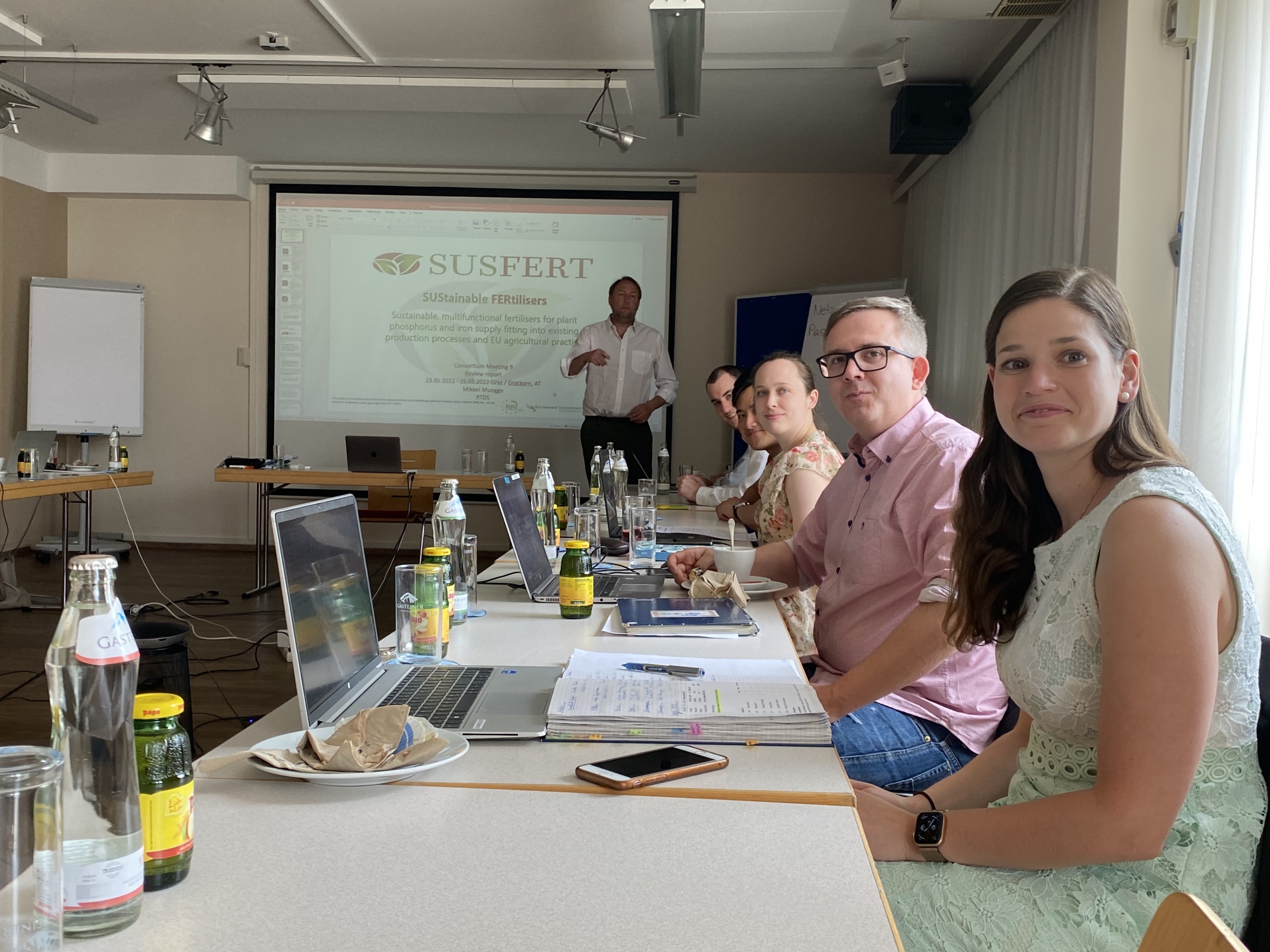 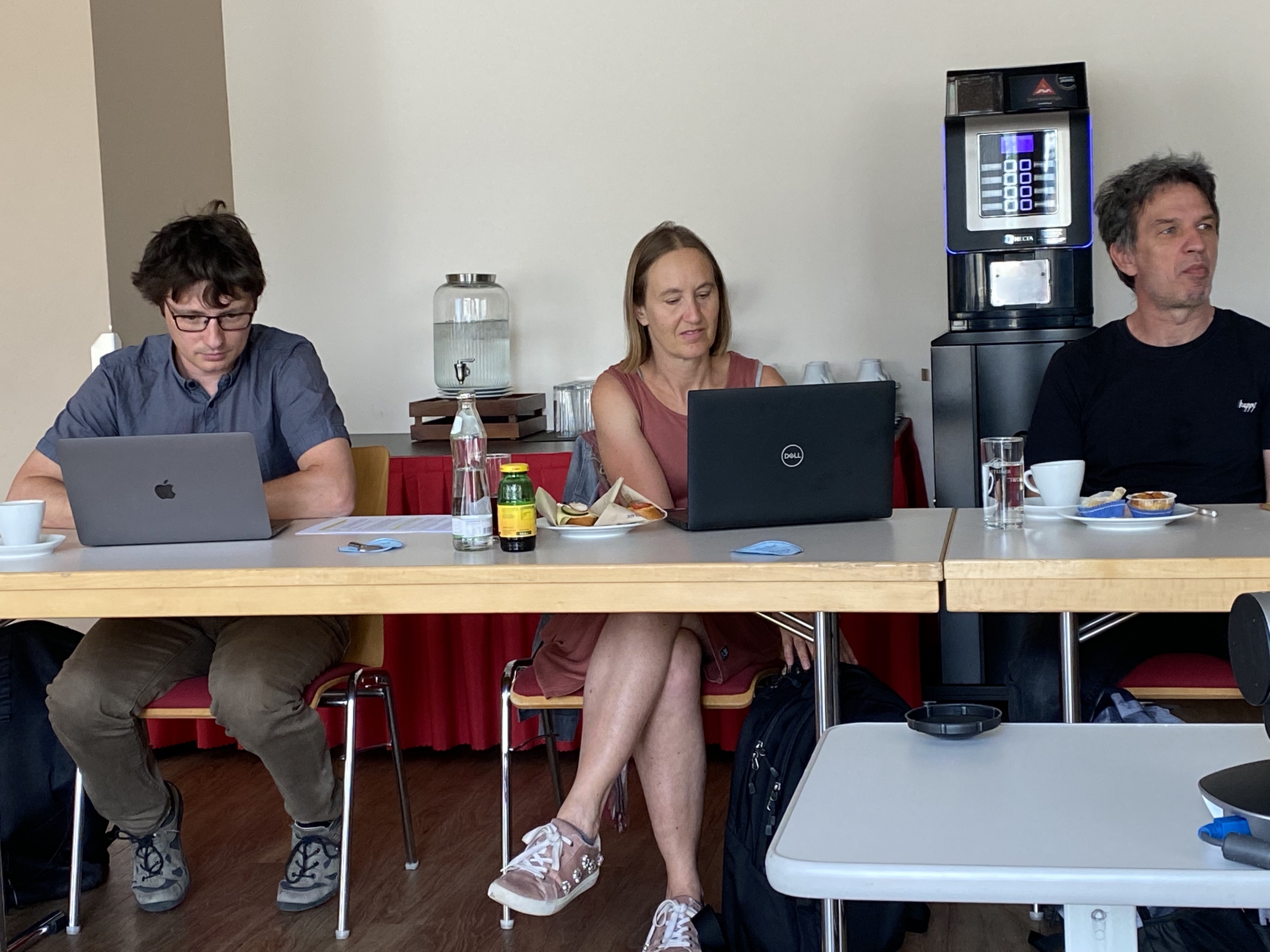 European projects strive for gender balance.  SUSFERT is pleased to say that its gender balance has improved with the arrival of two new Consortium partners, bringing the count of women to 40 per cent on the project. 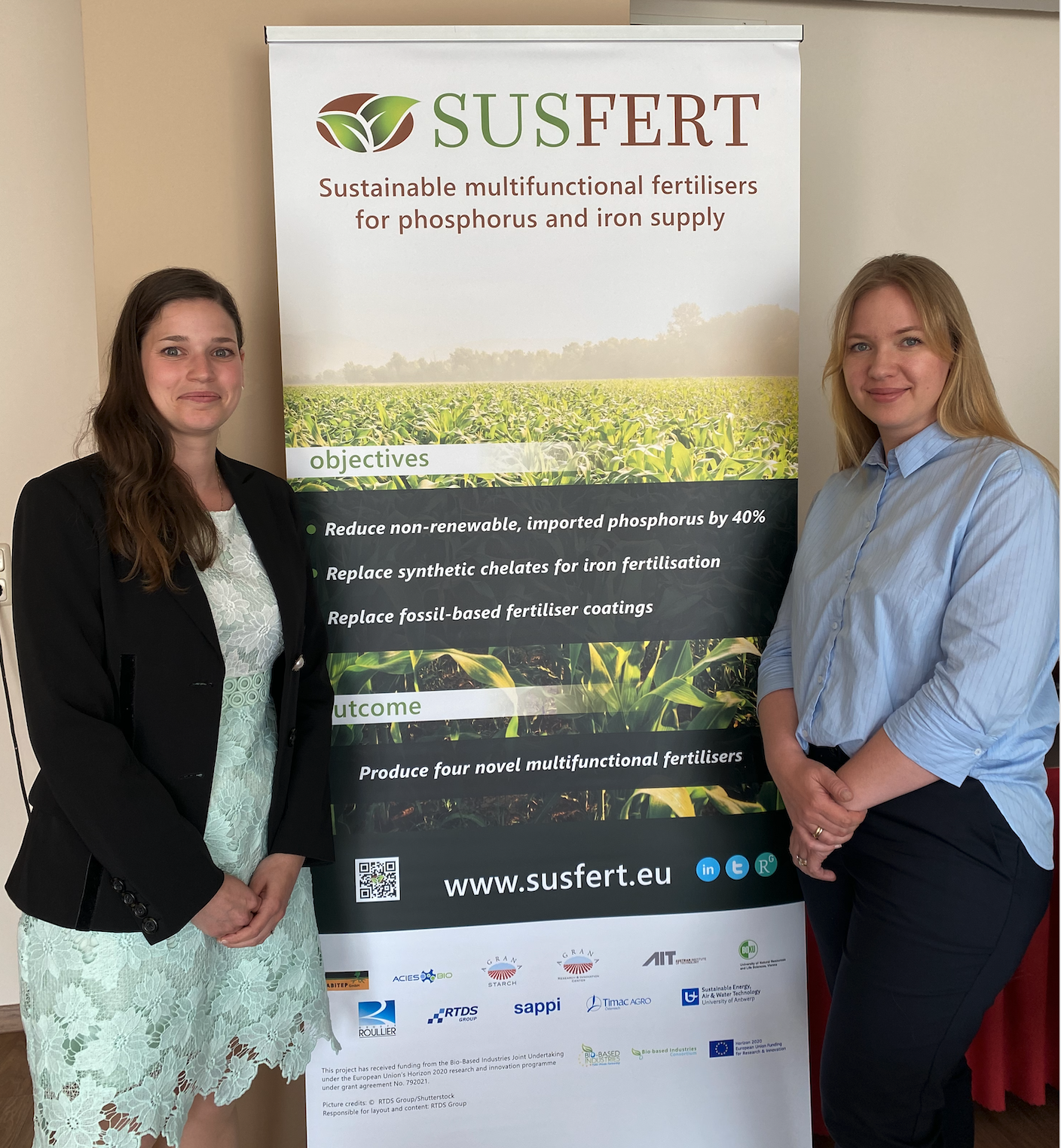 Later on the first day of the meeting, the group had dinner at Der Steirer restaurant on a warm, humid evening in Graz. 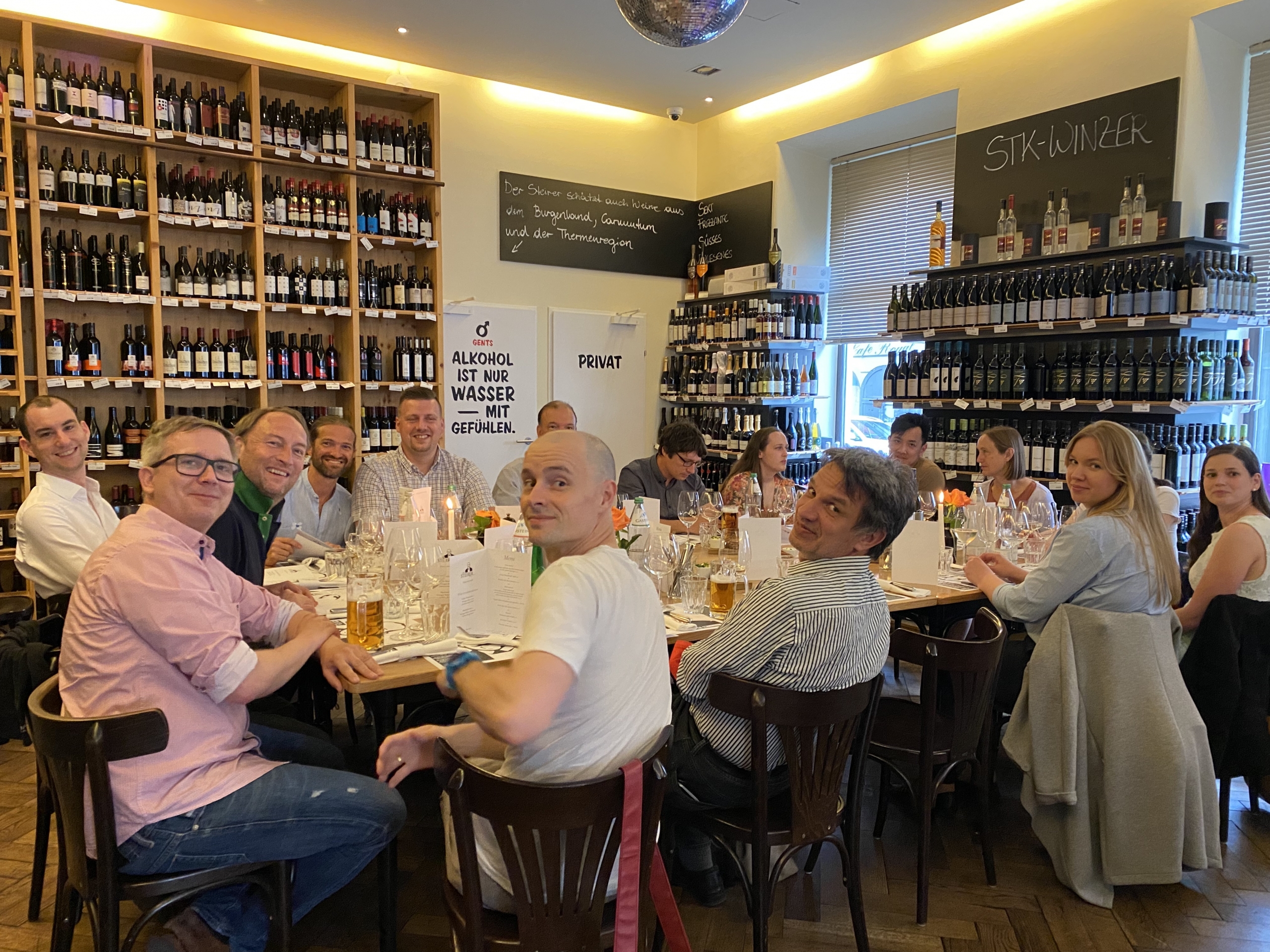 SAPPI Gratkorn Mill hosted the Consortium on the second day of the meeting where SAPPI Gratkorn Mill Director, Max Oberhumer, gave a presentation on the operations before the partners were given a site tour, taking the group into the world of paper making and its side-streams.

According to Sappi, Gratkorn is one of the “largest and most advanced coated fine paper production lines in the world” that exports its products globally. The mill was upgraded in 2014 to improve its paper making processes with state-of-the-art engineering and scale, additionally addressing environmental impacts that saw a decrease in emissions and noise pollution. Importantly, the surplus of the energy production generated at the mill supplies North Graz with energy for heating.

The Sappi mill is 70 hectares, and to walk the circumference of the area would take more than 1 ½ hours. The SUSFERT mill tour took us on a 3-4 km walk.

One of the mill’s retired employees, Helmut Oswald (below), now volunteers as a tour guide at the mill. Sappi employs 1,200 people at Gratkorn, and as a major employer to many residents of Graz, the company has close links to the city.

SUSFERT Project Manager could not resist taking over the microphone for this photo opp.

Later that afternoon we have a picture perfect group in the beautiful setting of the famous Styrian wine-making region. The project partners visited a Buschenschank tavern which is an informal sit-down in the vineyards where the owners serve regional produce. 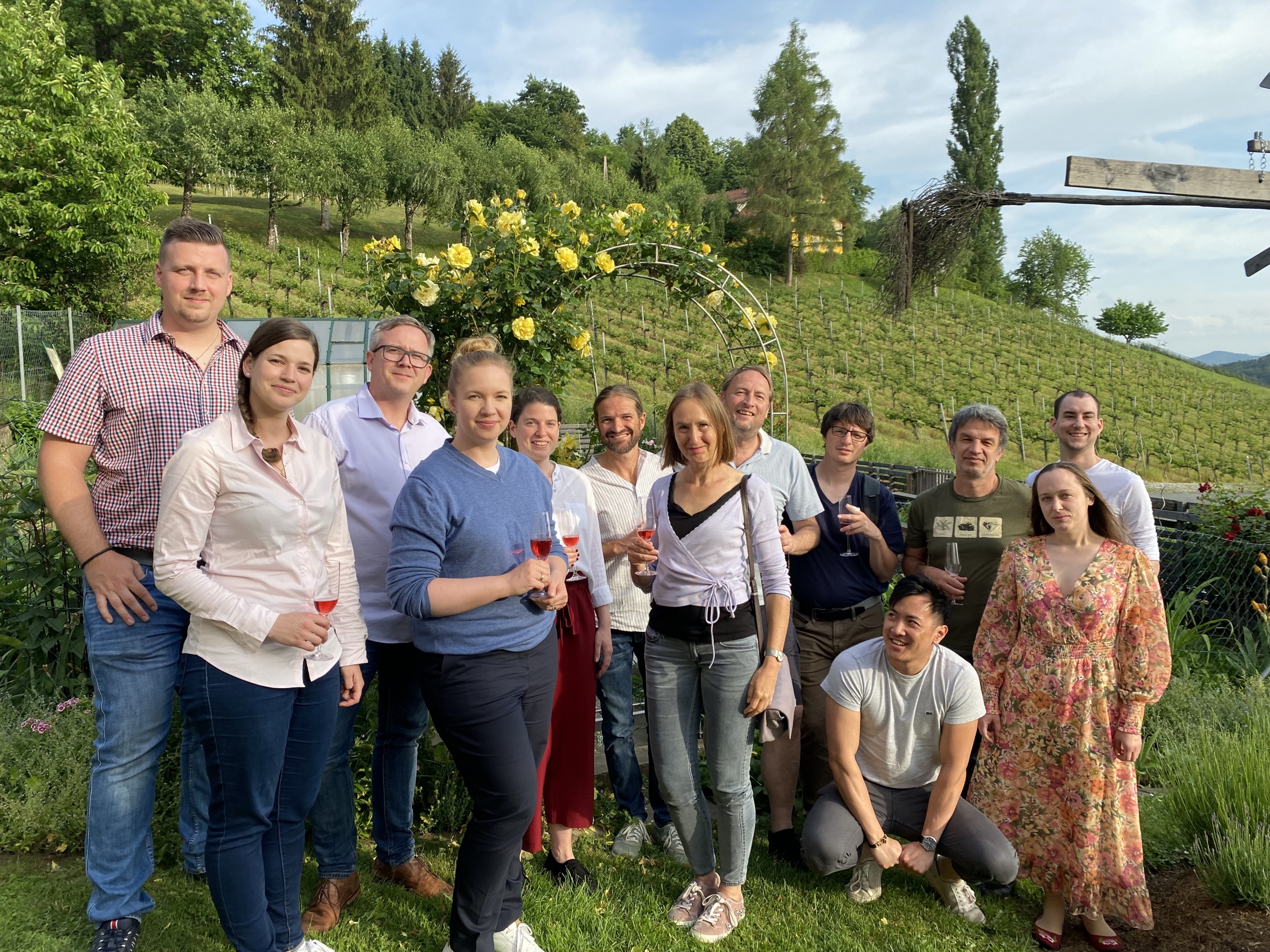 After all the hard work, SUSFERT co-ordinator from RTDS Group, Mikael Muegge, and the scientific co-ordinator from the Austrian Institute of Technology, Günter Brader, share a laugh which is what cements good working relationships between project partners.

The 2022 field trial results will be analysed and discussed at the next Consortium Meeting after the harvest this year.